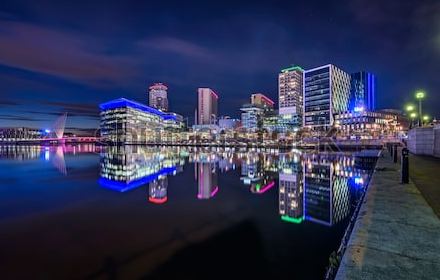 From my place of work the lights of Manchester shine in the distance as evening closes in.  The city is changing, the network of trams, gleaming high-rise apartments and rejuvenated quaysides all provide ample evidence of that.

All of this however may just serving  as a precursor for what is to come as  the word’s first industrial city confirms its intention of becoming ‘Carbon zero’ in an astonishingly short twenty year timespan: Manchester-news/climate.

It’s no longer a case of just switching a few lights off but  a root and branch evaluation of how the city continues Its transformation in a process some are calling the fourth industrial revolution.

The moorland fires and endless drip feed of ecological disasters is focussing the minds of stakeholders and politicians in Greater Manchester where year on year 13% carbon reductions will be needed to meet the twenty- year target.

The University hosted speakers from the Tindall Centre and Climate Change Agency as urgent areas for action were include heating and transport.  As in Scotland where a similar theme is emerging through the nascent scottish-energy-strategy there will be profound implications for business and indeed the University itself as it adapts to the new reality and catch up with its siblings at the Metropolitan University and their state of the art Hydrogen Innovation Centre

Readers of this article find this one- day introductory course of interest:

As the Tindall centre’s Dr Kuriakose indicated, change is coming – whether we like it or not.  Like all profound change it brings disappoint for some such as fossil fuel industries and opportunities for others including electric vehicles and associated infrastructure.  Manchester is once more well- placed to be at the forefront of industrial and its associated skills.

Your organisation can benefit from my input now.

It can be delivered in your office or any global location.

For an in-depth discussion tailoring support to your requirements