Going full circle. Is it onshore wind’s turn to learn from the offshore revolution? 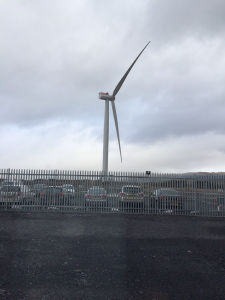 Onshore and offshore wind have often been thought of two distinct entities; onshore emerged first with Delebole being commissioned in 1991, offshore emerged around a decade later and has burgeoned into an industry with a capacity of over 6GW installed. So, with a decade to make up what can offshore teach the more mature onshore industry?

1.    Turbine size. GE recently announced a 12MW behemoth around 25 times larger than the original 400k machines installed at Delebole – the largest in the world at the time. The bulk of onshore and offshore costs lie with the turbine and although more expensive, the cost per MW comes in at a fraction and makes projects viable in a post-support world.

2.    Larger machines do bring issues to the onshore environment: landscape and visual concerns, lighting and access issues all need addressing, this is tricky, often needing specialist input, but not impossible. There are onshore schemes in the public domain with tip heights of 240m; which if they are sited in a strategic and careful manner can be accommodated in the UK especially if the local supply chain is utilised and community benefit or buy-in is encouraged.

3.   Some of the issues surrounding aviation lighting and getting such large machines to a site are being addressed; initiatives such as intelligent lighting and splitting the components parts in novel ways are making the previously impossible, possible.

4.    Think incremental increases rather than huge tip height change – for an incremental increase of around 15% the output is essentially doubled. There are already plenty of machines with a tip height of 145m spinning in the UK usually with a 3.45MW nameplate. A machine with around 169m to tip at only around 15% percent taller can come in at 7MW – with commensurate project economics and of course a greatly enhanced community benefit offering

5.    Innovative and sometimes novel ways of transmission, construction, programme management and finance are all operational offshore. Translating these innovations to an onshore environment is possible; the Scottish Energy strategy published in Dec 2017 recognised this and will provide a policy backdrop to encourage developers prepared to think big.

Fanciful? No, it is happening today, a recent piece of work in which I was involved clearly shows how:  http://renews.biz/111111/cwp-maps-400mw-onshore-giant/

Get in touch at charley@charleyrattan.co.uk if you’d like to explore how your project pipeline can benefit.

5 thoughts on “Going full circle. Is it onshore wind’s turn to learn from the offshore revolution?”