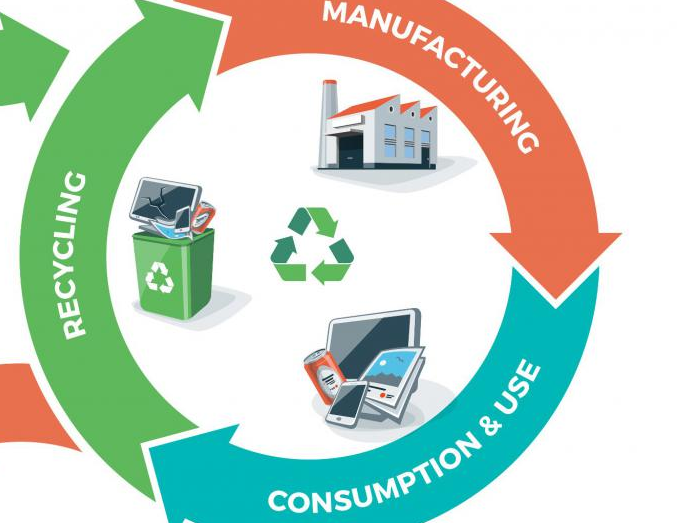 Hearing a good deal about the ‘circular economy’ recently I thought it a good idea to go and find out more about it.

In my field, offshore renewable energy, stakeholders increasingly request details of decommissioning plans and re-cycling strategies at an early stage of development. After all the mindsets driving renewable energy and sustainability are closely entwined.

Here is what I learned, as Stephen Sykes talked us through the reality.

There was good reason for the ‘oil age’ as one barrel of was equivalent to a decade’s worth of output from as single worker.   However, earth overshoot day, during which consumption rates match the time taken to replenish earth’s resources, occurred on 1 August – and it is getting earlier every year. Our ‘linear’ economy chuck- away lifestyle coupled with population growth is rapidly depleting the planet.

Ellen Macarthur, the round the world yachtswoman, whom I’d come across as a champion of renewable energy a decade ago during my time at eon, is now promoting the cause: https://www.ellenmacarthurfoundation.org/ and forcefully reminding us that the earth’s resources are indeed finite.

‘Closing the loop’, to avoid running out of essentials, will entail viewing production in -the- round and designing in re-usability from the outset. Examples range from fridges to electric cars, wind turbines and electrical infrastructure.

Large companies have strategies based around Corporate Social reporting (CSR), but imminent recycling targets raised from 40%. to 65% for business, will likely provide a wake up for the waste industry.  We learned that the chemical industry never thought in terms of waste but ‘by-products’ which could be profitable and gave examples where the change was monetised via clever innovation, including the extraction of metals from car exhausts, and then sold at an attractive return.

Readers may find this of interest:

Green options, such as using hydrogen to avoid emission penalties are already happening in construction. Tender requirements – which will only get more demanding as will inevitably happen in Manchester the: worlds-first-industrial-city-leads-fourth-revolution will help drive the process forward and include bodies such as hospitals the universities and of course government itself.

The transition is likely to be gradual as business models evolve , stakeholders engage and customers react The trend is Europe- wide https://ec.europa.eu/jrc/en/news/research-helps-europe-advance-towards-circular-economy

Whatever happens the UK will play its part.